I had a scare. Something wasn’t right, and it didn’t seem to be getting better with time.  I went to the doctor and he did an exam and all the tests came back normal!  Yay!  My doctor may be a better GP than I give him credit, but this was the same guy that, when I went in to get a followup on my hip surgery, said, standing outside my door, “Oh My God! Have you ever seen this much metal in one person?” and then nonchalantly walked in and asked me how “we” were feeling.  “I hurt, but how about you?  I heard you panicking outside.  Are YOU ok?”  Anyway, he gave me a prescription and when I got it and opened the box, it had a sheet about 2 feet by 3 feet in mouse point front and back about the stuff in the tube. I spent about 45 min looking for the dosage information.  It was about 2 lines in the middle of all this mess.  Side effects include but aren’t limited to

So it leaves me with a few questions.

I can’t wait to be off this stuff.  It does appear to be doing what he said it would do, but it’s a pain in the ass to use.  Do other countries have to put such ridiculous packaging on everything?  I think the box could have been 25% smaller without the disclaimers. 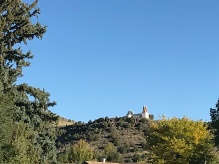 Look at these pictures!  Aren’t they amazing?  Great Sand Dunes, a lovely peak with aspens in full color, another view of the aspens against a cobalt sky, and a church on the top of a big hill.  You know what the problem is on vacations though…food.  I ate food.  I’m not supposed to eat food.  New Mexican cuisine, burritos don’t taste like Taco Bell here.  I even had duck for dinner once!  What does that mean?  It means that now I’m at 218 pounds.  Holy Crap!  Almost 4 years at the gym, averaging 1500 calories/day, and I’m 15 pounds heavier than I was when I started.  That’s measurable.  That’s progress–meaning I’m moving somewhere.  Let’s face it.  I’m NEVER going to be in beach body shape.  But I needed that sound of the wind in the trees, the hawks soaring over, even the Ravens cry in the early morning.  I needed that smell of pine and cedar.  I needed that rain, sleet, snow, hail, 0 visibility, long hours in the car, purse full of postcards and memories of hikes, museums and galleries, and last but certainly not least, time with my best bud, my husband.  We even lost power in the town where we were staying.  2 hours of darkness in the hotel.  They weren’t worried, so I wasn’t worried.  The power came on with little ado.

So yes that’s snow…and it got so thick when we left that we couldn’t see anything but the tail lights ahead of us until we were about 50 miles west of Ogallala, NE.

One week later, I was at a Girl Scout Camp Alumnae Event and we did low ropes activities and archery.  Sore?  Ok, the tops of my feet weren’t sore, but everything else was.  I’m still toooooooo weak on my left leg.  Dammit.  Then of course I had gained all that vacation weight.  I couldn’t transfer weight from good to recovering leg, and couldn’t balance on recovering leg and move good leg.  Couldn’t get to 2nd of the bosun chairs.  Hands hurt, legs and back and tummy hurt, arms hurt, eyebrows hurt?  It was fun because my daughter was there.  It was also a reminder that I am not, and have not made my fitness a priority.  It always takes a back seat to whatever I’m doing at the time.  Dang it.  I don’t like having fitness a priority in my life.  I want my LIFE to have priority–seeing things, doing things, experiencing things!  But OOPS, I can’t see things, do things or experience things in my current condition.

I guess I have to make it a priority until I am in a condition that I can have a life…tomorrow.

I follow several blogs.  A great many of them are success-oriented.  The interesting things they all have in common is that everyone is programmed from birth to be what they are now.  We all believe what we’re told between the ages of 0 and 6.  Our personality is set by age 6, and everything we do and think is what we’ve been told to do and think.  We put ourselves in bad places mentally and physically by our attitudes on life:

The gist of this is that nothing we do on Earth matters, so you might as well enjoy your stinking life in your paycheck to paycheck job with your boring spouse and your over-scheduled kids.  Who wouldn’t want to take an automatic and shoot everyone in sight?!  There is no hope in this view of life.  But some people actually enjoy life.  That’s just wrong on so many levels.  They should feel guilty for how much time, freedom and money they have.  They should spend it on us because we have no time, no freedom and no money.  Why can’t we become people with time, freedom and money?  Because money is evil, or the root of all evil or the love of money is evil or something from that book that has the gold lettering and 2″ of dust on it.

It’s true–money can’t buy your happiness.  Neither can NO money.  Money represents trade.  I trade what I have in goods and services for what I want from someone else’s goods and services.  I cannot trade music lessons for carrots, but I used to trade it for 1 gallon of fresh milk (directly from the cow to me!  I had to pasteurize it myself) and 2 dozen brown eggs.  I trade what I have in talent and time for a substitute type of currency (little pieces of paper with pictures of famous people on them) that I can use to trade for carrots.  I don’t have to find someone with carrots that has an interest in guitar lessons.  Much handier.  I can trade information on finances with someone that wants to trade information on history.  Although it would be mentally attractive, I cannot make stew with historical information.

Turns out, I was programmed differently.  I have suffered from that all my life.  One of the most asked questions in my family as I was growing up was, “What do you think?”  Silly me.  I thought everyone had this kind of discussions at home.  I was an outcast because I actually thought that what I thought was interesting, in-depth, and had some sort of worth to the people who surrounded me.  I was wrong.  I found out I had been programmed wrong…bad code.  People were people and just wore different skins and hair.  Some were good at thinking, some were good at working with their hands.  People were fascinating creatures.  We don’t all think alike or believe alike or act alike, and that makes humans interesting.  Somewhere, sometime, some people became aware that since not everyone thought alike, some must be right and the rest wrong.  Oops.  And since I didn’t think like that, I was wrong and was ridiculed for it.

Let’s just settle this here and now.  I’m right.  Now let’s go on from here.  There is more than one way to accomplish things. It is ok to make money.  It is ok to enjoy yourself.  It is ok to want freedom and time to do things.  Work is fun when you contribute to your society.  There is no one way to do that.  It’s like Paul described the church in the bible (1 Corinthians 12:12).  The reason the rich get richer is because the rich think differently than the poor.  The rich trade thoughts and innovation for money, the poor trade time and effort.  The rich look for assets–things that provide multiple income streams.  The poor look for a 52″ flat screen and diversion and put their money into liabilities.  So you could have a large bank account and still be poor because you look at the money as an asset instead of a tool to accumulate assets.  You could have a 0 bank account and be rich because you can trade your time and effort for an asset that brings in money regardless of your attention to it.

Jim Rohn says that every child should have 2 bicycles–one to ride and one to rent.  The child doesn’t have to ride both bicycles, and doesn’t even have to ride one.  He might rent both of them!  Then he could use the money to buy a 3rd bicycle.  See?  He now has a revenue stream.  The maintenance and repairs on the bikes might bite into the revenue stream, but it wouldn’t stop it.  Sooooo, the kid with 0 money goes and does odd jobs for the neighbors to earn money to buy the 1st bicycle.  He rents out the bicycle because he can’t ride it while he’s doing the odd jobs.  He has an active income stream from his own efforts, and a passive income stream from his little brother who rents the bike from him.  The kid now uses the profit to buy a second bike, and now can ride further around the neighborhood to do odd jobs and increases his territory.  He enlists the help of one of the neighborhood kids to do some of the work, and though they split the profits, the kid still has to rent the bike to get to the jobs.  If kid II doesn’t figure out what kid I is doing, he continues with this arrangement as long as Kid I continues to get jobs and rent him the bike.  Kid I becomes fairly well off.  Kid II has money for movies and snacks.  Which one becomes rich?  Kid I’s little brother is without a bike since Kid I rents it out to the neighborhood boy to help with his business.  Kid I’s little brother gets his own bike the same way by selling lemonade on the corner.  Then he adds cookies to the stand.  Then he boxes up some of the cookies and sells those.  Then he hires a neighborhood girl to run the stand and opens a 2nd stand in the neighborhood down the street.  The children in that household have figured out what assets are.

Was I programmed like this?  Why, yes, yes I was.  I cannot bring myself to work for others.   I do not have a 6 figure income.  I have been to Europe 3 times since I was married.  I have been in every state except Hawaii and Louisiana.  I paid cash for the $1450 repair on the car for a compressor.  I have investments that grant me multiple streams of income.  I am not rich because I have a big bank account, I am rich because I have multiple assets.  I have time, freedom and enough money to do what I want.

Once you are aware that where you are you programmed yourself to be, and where you want to go is also programmable, write the program!!!